The Big Bang Theory. Say that phrase in a mixed crowd, and there is a likelihood that many people would've heard of or even watched the show. It's an uncanny phenomenon, how syndication can make a mediocre sitcom with semi-relatable characters the number one comedy in the country. However, after gaining recognition, the show started to improve on its plots, comedy, character development, and to an extent continuity. The last three seasons have showcased the writers' blithest jokes accompanied with a mature level of writing. Moreover, all three seasons seem to end similarly: a male member of the cast leaves Pasadena. It's a very simple plot that the writers have toned down each season: first it was Howard in space, then Leonard in Iceland, and finally Sheldon all over the country. The seventh season's finale did have some strong points, but the writers failed to carry them onto the eighth season.

That's right, the eighth season started on the wrong foot. The plot for the season premiere didn't go even slightly as planned for Lorre and Prady. It started off 45 days after the epic "Where Is Sheldon?" episode last season with Sheldon calling Leonard to pick him up after he had been robbed. The cold open might have shown some promise for the episode, but the half-hour of television felt like more of a drag. About five minutes into the episode, I was wondering when the comedy would come on. It was as though the writers chopped off their comedy like Kaly chopped off her long locks. The scene of the A-plot that will stick with me the most is the one when Sheldon confesses to Amy how we wants to seem perfect in her eyes. But that didn't last long. Right after Amy consoled Sheldon, he burst into a rage that he didn't want to be with her anymore. I feel like those days when Sheldon used to resent Amy's advances were behind us, but the writers don't, so they let Sheldon derail all the way back to his socially-awkward self.

The subplots were rather intriguing for a season premiere. They are the type of stories that are a part of an episode that is long remembered as it changed the course of the show. Once again, in this case, the episode won't be remembered as one which moved the audience or even made them laugh hysterically, but it will be recalled as one with a weak base and two strong subplots. The first one invloving Howard's disgust at his mother's close relationship with Stuart was hilarious. All the times Raj tried to outdo Howard with reasoning along with Stuart diminishing Howard as a son are moments a fan may very well remember, and this fan most probably laughed really hard at the voice message on the answering machine. The second subplot dealt with Penny's career: a subject that I am forever looking forward to view. As her acting career still isn't getting a kick-start, she joins Bernadette's company. The interview was another blithe moment, with Penny's repetition of the word "people". Bernadette's portrayal as a bully in a nice girl's shoes is also one to snicker on, as the interviewer ridiculed her voice with Penny. I reckon it will be an interesting turn of events if Penny finds success in her new job, and I hope the writers will be able to pull this one off.

I generally give the writers the benefit of the doubt when it comes to season premieres because no matter how much you try you can never nail them. However, if you try your best, it will be the perfect stepping-stone to a new arc in a new season. Amy's desperation throughout the premiere didn't feel natural, nor did it feel comfortable. The same thing can be said about the comedy tonight: it felt like Chuck Lorre was trying a little too hard to get his jokes working, and I, like the controlled live studio audience tonight, didn't laugh at overbaked jokes. Better luck next time...

- Every season premiere, my thoughts are always, "What happened to everyone's hair?!?"

- Raj feeds his dog with his own mouth.

- Bernadette: "Penny, you're cute, you're flirty, and it started out like there were gonna be three things."

- Sheldon's test probe to ensure that Amy's not listening: "As soon as we get home, I want to have coitus with Amy."

- Debb-Debb and Stewie's pre-recorded message is the definition of weird. I love how Raj avoids admitting that he finds it weird too. 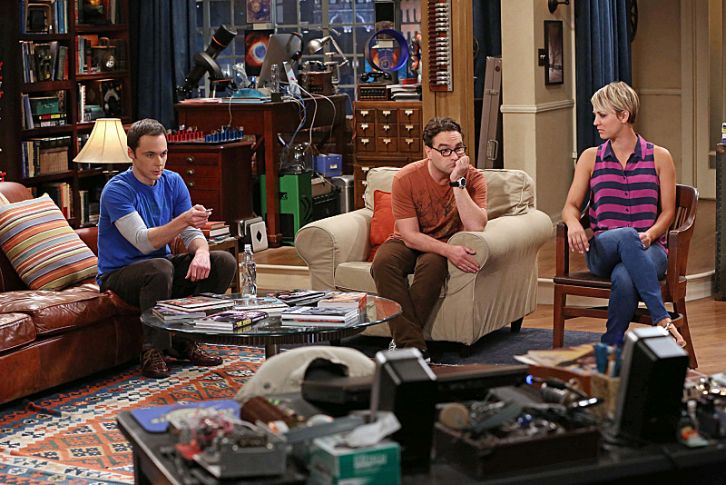