This episode had elements of each in it, and that's what made it a classic. The story behind the slap can be traced back to 2007, when we also uncovered Robin's alter ego: Robin Sparkles. "Slap Bet" is said to be HIMYM's finest hour hitherto because it created two running gags that the viewers absolutely adored. This week, the writers completed the leg of the slapsgiving trilogy. The previous two were average episodes of HIMYM, with the delivering of the slap being coined as the B-plot. However, as the show is coming to a close, the writers decided to get an episode revolved around just the slap, and nothing but the slap.

Many people had opposing opinions on the "asian" content of the episode; however, I considered it as positive racism. The garments, the behavior, the humor and the general atmosphere of each set gave an overall comic feeling. The introduction of each master was funny, but Ted's introduction was the best: "Brooooo!" The episode proved that while HIMYM has its own uplifting moments, it is always going to be a sitcom. The funny had its limits, and that's the way we like it. However, as always, there are people who can never be satisfied. When HIMYM goes into their deeper moments, these people complain. And when HIMYM turns the funny machine on, they call HIMYM a "horrible show." So what if a show has versatility? It just shows that the cast and crew are talented.

The storytelling followed HIMYM's conventional method: flashback. This time, the frame of the episode is the slap of a lifetime, with the overly dramatic music. The second frame was in the show's mural: MacLarens Pub. The tradition of sitting around the booth and talking about life is revisited, and that's a good sign. The main point of the episode was how Marshall trained himself to make this slap as humanely painful, so that Barney really feels it this time. The comedy generated in the episode is one of the best kinds, and the writers seem to know what they're doing. A good example would be scene in which The Calligrapher dies. He gets a good ten to fifteen minutes to casually converse during which he teaches Marshall how to slap accurately ("Look where you're slapping." That's gold!) and promote Cleveland as a city. Another good one was a running gag in the episode when the gang would gang up on Barney each time he would find a flaw in Marshall's story.

This episode concludes the Slapsgiving Trilogy. It seems like just yesterday that we had 3 slaps remaining for the first ever Slapsgiving. However, out of all three, this one surely steals our heart because it's nostalgic, and it's one of the reasons HIMYM deserves the emmy this year. I just hope that the rest of the season will pass as swimmingly as the episodes behind us. It just feels new to miss HIMYM before it's even over. Well, I guess that's what you get when you've been with a bunch of people for a decade...

- Even Chinese Ted is douchy: "Grammar is the first step to a thousand mile journey to accuracy."

- Red Bird and Marshall have a cute inner slap joke. While one eats, the other one must get slapped each time the meal's course is changed.

- Barney: "It's like my face were covered with that numbing cream we all put on our deals to go all night." Those classic Barney moments when no guy on the planet relates to him are just the best.

- Chinese people: "This is to slap Barney Stinson? Yep, I'll totally help you!"

- HIMYM brings back the old characters just to slap Marshall in the face. 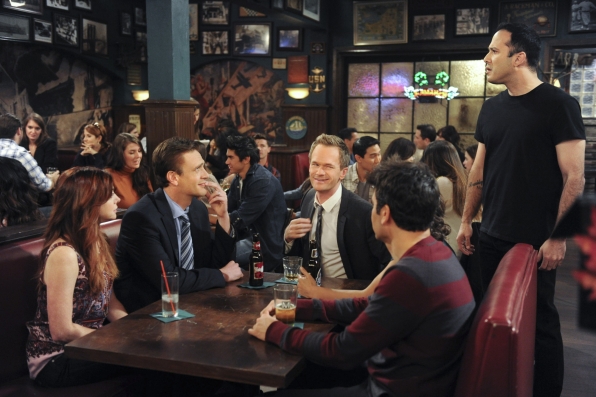