It's strange to think that a few years ago Howard and Raj put Sheldon up on a dating site as a joke and introduced Amy Farrah Fowler into our lives. Amy was the last character to join the show's updated roster in 2010, but she has definitely brought about some major changes in the dynamic of the show, and this episode heavily indicates how Amy changed Sheldon, the breakout character and one of the primary foci of the show. Looking back at the original Sheldon we were introduced to, one would have never guessed that he would voluntarily search for a female companion. However, here we are, nine years in, and Sheldon wants to find a new girlfriend since his love for Amy will never be fulfilled.

The romantic gear is heavily employed in tonight's episode, with both Sheldon and Amy venturing into different relationships to get over each other. It's a change from the use of both the scientific and romantic gears, but it certainly is welcome: the "golden years" of seasons five, six, and seven heavily focused on the relationships which held the show together. These two plots occur almost mutually exclusive: there isn't much interaction except the initial scene when Sheldon tells Leonard and Penny of his plan. However, even though they don't tie together, the two plots seem almost perfect for each other, much like Sheldon and Amy, as they bring about the failures the two have when they try to find others to fill the void.

As I said before, Sheldon employing Howard and Raj to find him a girlfriend is uncovered turf for the writers. Thus, watching the guys construct the quiz to entice women and looking at how Sheldon reacted when someone showed up were actually entertaining. It wasn't a recurring joke that was less funny than when it had originally aired: it was a fresh joke, and the reactions elicited weren't partially due to nostalgia. They were due to the sheer comic ingenuity of the writers combined with the impeccable delivery of the actors. These moments were sparse last season, and it eventually lead to the show missing out on their usual Golden Globes nominations. However, the writers weren't entirely at fault: season eight didn't fall into the "glory years" only because it was a rebuilding year, much like the fourth season of the show. Season eight's primary goal was to appease the dwindling original fanbase without turning the new fans off the show.

Now that the writers have more experience on handling more than one gear, this season can run a lot more smoother, and with a more defined general plot. However, that doesn't make the results perfect. In relation to tonight's episode, Sheldon's reaction to dismiss Vanessa was predictable. but I would've preffered that Sheldon at least give her a shot instead of dismissing her because she missed some deadline. The Vanessa-Sheldon arc would have been an interesting parallel to the Amy-Dave segment that aired tonight. The irony in their date was delicious enough that the writers stretched it without any fear as the jokes were often coupled with Mayim Bialik's phenomenal expressions or a sneaky Bernadette walking in the background. The Bernadette-Penny segment is less of a plot and more of an accent on Amy's date, thus it is reasonable to consider them as the larger plot of tonight's episode. The side jokes involving Bernadette's spying skills were mildly entertaining, but there were some great lines packaged in that made a big difference, much like the punch lines that propelled Everybody Loves Raymond.

- "I need a new woman in my life to ignore so I can hyper-focus again!"

- "No one bought me drinks at a bar just because my brain just popped out of my shirt!"

- Sheldon: "People compete for jobs and trophies. Why not me?"

- "That's why I left England. It reminded me too much of her: cold, gloomy, and easily accessed by a French man through a tunnel." 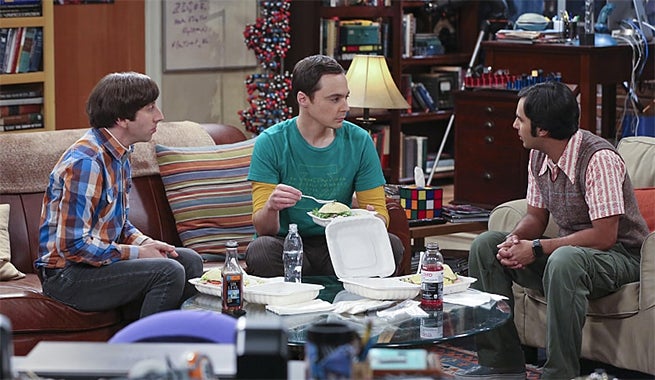