The word "nostalgia" shouldn't be taken lightly. I often reminisce of the past and remember how simple things were back then. For instance, this week, when Penny and Sheldon were staring into each other's eyes as part of the experiment, Penny smiled and remembered the first time she met the guys. Honestly, when season one began, I recall having no hope for the show, but I did enjoy the pilot episode. There were no couples like there have been since season five. I usually classify the first four seasons of the show as the seasons when the friendships among the characters strengthened, while I classify the recent seasons as the couples' turf. I find it amusing to see how everyone's changed over the past few years, and I often do recall the episodes which marked a change for specific characters. For Sheldon and Penny, I always remember it as the trio which made them incredible friends: "The Bath Item Gift Hypothesis", "The Adhesive Duck Deficiency" and "The Robotic Manipulation." I regard these episodes as the building blocks of the incredibly intimate frienship they currently share. This week's A-plot was a kind reminder of the relationship and how they do care for each other despite the snarky remarks they make.

The remainder of the episode wasn't as charming as the A-plot because the writers didn't want us to focus on them. After the episode was done, all that came to mind was the expriment. I mean, it was an apt catalyst to get the characters to open up about themselves, much like how the writers used the theme of letting go last week before announcing Mrs. Wolowitz's passing. The subplots this week partially forwarded the storyline of the show, as the aftermath of last week was still being discussed. It was refreshing to see Howard loving his mother for who she was, not making fun of her. However, I was disappointed at Bernadette's lack of sympathy for Howard. I mean, the man just lost his mother. How would you feel if none of your parents were there for you anymore? Howard's emotions were another attempt of the show's to dabble in drama, but luckily they didn't bomb and actually succeeded this time. The drama wasn't too heavy for a traditional sitcom, and the writers did add some good comedy in there, so I would call that plot a hit. As for the other plot, it was just a filler, but I must say I do enjoy Emily spending more time with Raj's friends. The relationship he has with Emily reminds me of Ted's relationship with The Mother. All the years of waiting finally culminated in finding his soulmate. While I'm unsure if Emily is Raj's 'The One', I am happy to see Raj also in a couple, as he was side-stepped for a long period of time when the show began using the couples as plotlines.

This week's review is also short, becuase I don't feel like anything substantial actually happened. This episode will fit snuggly into season eight and maybe won't be remembered as a fan-favorite, but I can assure you that if fans do rewatch the episode, they would have a huge smile on their faces as they remember the pilot episode of the show: where it all began...

- Raj: "I don't need science to win her heart! I have my parents' money for that!"

- Sheldon: "You're not supposed to drink alcohol while operating heavy machinery." (While he points to his brain)

- Penny: "I just felt a wave of affection for you." Sheldon: "Are you sure it's not just bible juice."

- Bernadette: "One way or another we're walking out of this airport with a dead woman!"

- Penny: "Can you believe it's been eight years?" Sheldon: "And you're still eating our food!" 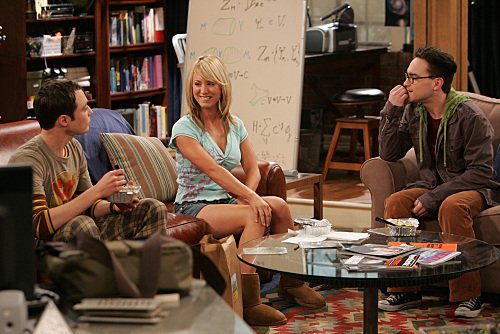