I have a theory that a show is very inflexible when it comes to its timings: when it doesn't air at its usual spot, things get out of hand. This hypothesis of mine was supported by the first few episodes of this season. Not only was the quality sub-par, but the overall comedy was also hackneyed, the character development was ignored, and the subplots didn't neatly and peacfully amalgamate into a cohesive half-hour of television. Moreover, the fans expressed disdain over the resolution of the season-seven cliffhanger: an unfunny, below average season premiere with relatively minimal intrigue. All these elements, once taken into consideration, would have easily led the show down the path it went down during its fourth season.

However, these two chapters of season eight have brought the show's game back. The comedy is on point, the subplots link up, and there is the feeling that the show is advancing: a feeling that the audience had for the last three seasons. Furthermore, there are the moments when the show proudly boasts about the character's clicheed flaws, which take the standard of the episodes to a whole new level.

The first half-hour of television is "The Expedition Approximation", i,e. the final episode of the show to air on a Monday. The rhythm here is perfect, as we can see the characters in their comfort zones, mocking each other, making the classic jokes we've loved for years, and somehow making us feel like the show has completely changed. For instance, when Sheldon and Raj had their meaningful conversations in the mine about Hannah Montana, it reminded me of the time Sheldon hired Raj and "Eye of The Tiger" played everytime they would put on their thinking caps. Furthermore, when Sheldon left Raj for his personal safety, the entire plot's purpose is defeated, just to portray Sheldon's boorish qualities. And that's the beauty of the A-plot, which culminates in the entire story occurring in a span of eleven minutes. It's a small detail, but it redefined the context of the previous scenes. My favorite gag this week was Sheldon's voice memos that Raj kept on repeating the obvious: Sheldon is a terrible friend. Those little splurts of comedy is what made the fans fall in love with the show, and as the show has progressed, these moments have become more subtle, i.e. they have acquired a style that the show is now known for.

Meanwhile, the B-plot of the episode advances the upcoming nuptials of Leonard and Penny while giving us a rare insight into Howard and Bernadette's marriage. The back-and-forth handing of the money was blithe, but the following events in the Wolowitz's home overpowered it by a drastic measure. The image of Howard as a boy in a man's body is furthered here, and I love it: the replacement of Bernadette as a "motherly" figure is a perfect example of the sophistication the show has acquired over the years. Moreover, the moments when Leonard tries to make Bernadette feel better and when Penny enjoys the couple fighting add a zing to the scenes. For example, when Penny said that she wanted to wait and see if Howard were to get a star for doing his chores, I literally laughed hysterically- my sister even came into my room and asked me if I was okay. These moments make the audience cherish the show, and they add value to the comedy. Without them, the show wouldn't have reached the peak of comedy viewership in the country.

The second episode of the lot adds to this value by introducing a middle-aged version of the old Howard Wolowitz and extending Leonard and Penny's maritial problems.  Dr. Lorvis' character may be a depressed version of the characters of the guys in season one, but it is interesting for the guys to openly portray their geeky nature. The excalamation of the guys at various operations Lorvis had operated, especially on celebrities, was a moment to relish. Furthermore, the concentration on Donkey Kong instead of the fact that Dr. Lorvis locked them in the basement was another big laughter moment for me. The comedy here is The Big Bang Thoery being itself in the best manner possible while completely redefining big comedy episodes in shows. The introduction of Penny's flirtation at work is a major plot development that could easily lead to intense episodes in the following weeks. It reminds me of How I Met Your Mother's classic episode "How I Mer Everyone Else", when the characters narrated how they met each other in various comic tones. The comedy is classic HIMYM, but the rich character development made the episode a classic. Many episodes in the following seasons have alluded to that one, and that's what made it a fan-favorite. In the case of TBBT, there aren't as many allusions, so fan-favorites and classics are solely based on how much they advance the plotline while balancing the comedy element of the show.

If we were to use those conditions to measure the greatness of the episode, it would be given an A star rating. However, there were moments when the comedy felt overused, such as Dr. Lorvis' switching of girls as soon as he met them. Furthermore, I felt that the Amy-Bernadette fight wasn't resolved completely, thus leaving a tiny but observable loose end in the episode. However, the rest of the episode integrated the plotline and the comedy well, and thus showed us that the writers have not lost their touch... 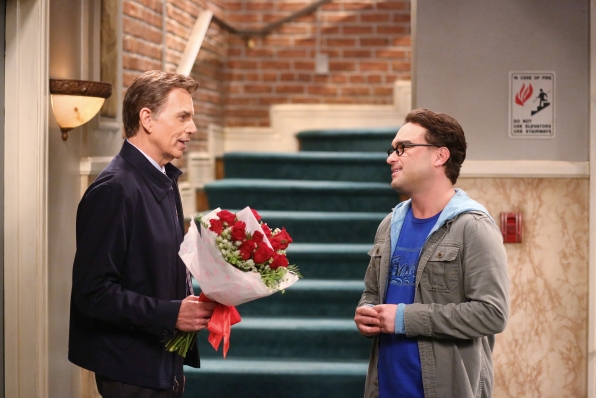