After last week's episode, a lot of theories flew around regarding the endgame for A to Z. The most obvious choice would be an inevitable breakup, but an engagement or even a death is highly likely. This engagement in a series is both beneficial and threatening for a show, especially a sitcom or rom com. If people are engaged in the plot's direction, there is an expansion in the show's fanbase, like in How I Met Your Mother. However, almost simultaneously, the investment in the characters and the story often leads to a hightened expectation from the writers to wrap up the show and tie all the loose ends the way the people want it to be done. If the fans of HIMYM had been more invested in its journey rather than its end, then the series finale would have made no impact on their lives. Nonetheless, people cared deeply about how the characters would end up, and when the writers chose their work ethics over popularity (the artistic debate is not to be made here, people!) it spelled doom as the finale's reaction was highly "polarized".

Having said that, I don't think A to Z has to worry about such a far-fetched problem in its first season, but there should be a plan set in place. I like how the narrator has already told us that this romance was doomed in the pilot (much like Ted's revelation about Aunt Robin in the series pilot of HIMYM). Thus, we know that this dating phase isn't going to last. However, if the last few decades of television have taught us anything, we know that the main part of any show is to enjoy the bridge, i.e. the journey to the end. One watches a television program regularly because one wants to enjoy it, right? Then, why would one envision the end of the series? A: Human nature: sometimes the writers poke too much fun at us for us to handle, and we immediately crave closure. So I advise all of the viewers out there to stop worrying about the ending of a show. If the show's run was amazing, nobody should care for its ending. That being said, the running of A to Z is pretty strong for now.

As we recall, last week Andrew and Zelda kissed, and then the episode closed. Then, we get back to the next morning, which resonates the previous night (typical rom com move), and starts off magically for the two people in the pair. The episode's cold open strongly contradicts its plot, and that's what I like about it. The fact that just a few minutes before starting the "making the other jealous" game, Andrew and Zelda confessed how they truly felt about each other. The description of the previous night was good, but I would have enjoyed a little more content. The night which was described in "B is for Big Glory" is of utter importance in the television world: it's the confused phase where no one knows if they're exclusive yet. Yes, it is overused, but it is also a boon for a plether of jokes, intervening friends, and various other classic sitcom attributes that some of us need. For example, the sexual innuendos used this week were of great use, as they clearly helped define the show as an 18-49 sitcom, not a fairytale young romance. This defining is more important as it helps the viewers take the show on a more serious note. If HIMYM hadn't included various scenes of emotional power, the viewers would have disregarded it completely, but because of the writers' detail-oriented scripts, the viewers payed attention to every little detail expressed in the episode. A to Z may be a rom com, but moments like insights into Zelda's childhood are perfect examples of why there is more meaning to this show. The final scene with Cristin Milioti's emotionless dialogue helped me get this show into an adult show's shoes.

The A-plot this week was exaggerated by an enormous amount, but it somehow worked better than the previous episode. The B-plot was simply the beta-test of the new Wallflower app, and that too provided a good amount of laughs, especially regarding Christina Kirk's acting. I must commend the writers for having this online dating edge within the show, especially with the behind-the-scenes of the dating apps like Tinder. Furthermore, I like how the show is open to the modern mode of living, and isn't clinging on to the traditional television style of living that was often seen on The Big Bang Theory and How I Met Your Mother. The inclusion of homosexual couples is always welcome, and I must also give the writers a firm pat on the back for not excluding them. That's something to think about...

- Dinesh saved Lydia's contact as "Big Bird".  (Also, I loved Parvesh Cheena on Outsourced. He needs a few more scenes in the show!)

- The simplistic style of the theme music of this show makes me love it. I love the colors standing out from the white background, and I also love the fact that the name of the episode is shown.

- Cristin Milioti's fake smile is on point, and I ansolutely adore it.

- Lydia: "There is a time in every organization for the employees to eat their own dog food!" I really didn't know where she was going with this one...

- Narrator: "For 18 minutes, they small-talked, discussing the most innane crap ever!" That sudden shift from formal to relatable was remarkable.

- Andrew starting writing down their celebrity super-couple name: "Zeldrew." I actually find that to be rather catchy. 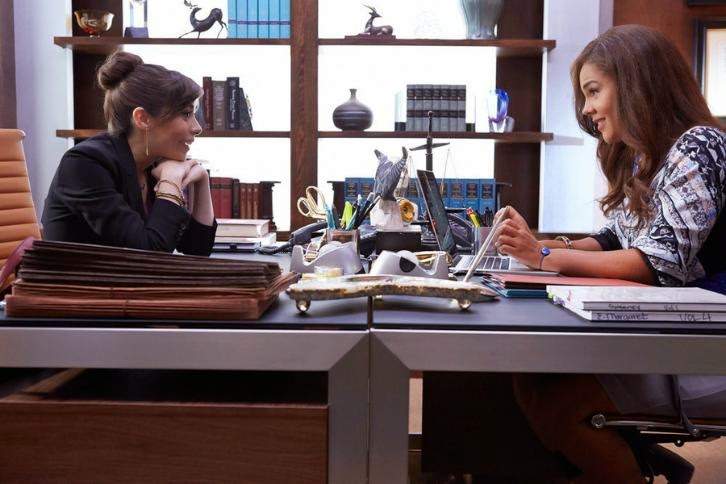