As soon as HIMYM ended last March, a lot of romcom sitcoms were announced. It seemed as though every one was trying to chase behind HIMYM's success as a show of the genre, as Alan Sepinwall had said. As far as HIMYM is concerned, this pilot has so many things in common that this might as well be HIMYM's soulmate. Not only do we know the fate of this relationship, but we also get the cliches (which I live for on television) that HIMYM often spoiled us with. Many reviewers found the show to be a little too light, but I reckon that since we've only gotten one episode out of this series, we might mistaken it to feel 'light'. Another reason is that we are comparing it to HIMYM, a show with a structure so complex, that often the writers would have to find loopholes to answer the fans with raised eyebrows.

In many ways, A to Z's pilot is a sitcom's adaptation to a huge, blockbuster romantic comedy. (I used Kristen Wiig's method to define a rom-com.) I know the pilot's gist isn't set exactly in that manner, but don't tell me you didn't think of When Harry Met Sally when we saw the flashback to 2012. Also, another similar trait with HIMYM, the flashbacks. We often see the narrator (who is anonymous, and who I guess to be a stalker for both Andrew and Zelda) going back to explain how this came about. That is a trait that I often like in sitcoms, especially because all or most of the questions the audience have are answered. However, with this vague date of 8 months, 3 weeks, 5 days and 1 hour, the writers are setting themselves for something they wouldn't be able to handle: a pre-planned ending. Carter Bays and Craig Thomas got over the fans' rage because they knew how they would react, but they stayed true to their ending. If the writers of A to Z follow suit, they must realize that this is a show that many people are considering their "Back Up HIMYM". They want this series to end the way they want it to, not how the writers intended.

Now that all of the big talk of the show's done, I feel like I need to say that the show, while cheesy, is warm and adorable. It's a feel-good show with positive vibes that I think will fill that HIMYM-sized crater in my heart. The Ben-Cristin chemistry is more than enough for a viewer to fall in love with this show. I mean, two opposites attracting is the plotline of any romcom, but this show sticks to the male and female stereotypes. It's an uncanny resemblance to How Harry Met Sally and how we view a typical relationship. Both the actors have the potential, as seen in the office scene before the big kiss, when Zelda sadly stared at an empty office's lights being switched off. That kind of acting made me nostalgic to the How Yor Mother Met Me episode earlier this year because in both cases she is struggling with love. Nothing can beat the compelling scene she had as TM to say goodbye to Max, but this episode's certain somber moments will do a little more than ''just fine'' for us. Moreover, the supporting cast seems stronger than ever. I recognize many of them, but my favorite must be Parvesh Cheena from Outsourced. I just love how his dysfunctional relation came to light when he was trying to dissuade Andrew from trying to hard, which is exactly what the writers are doing. They're giving the episode the correct amount of attention and light-heartedness, but alas! it isn't something we haven't seen before...

- Andrew: "This place used to do real matchmaking. Now all we connect are penises and vaginas!"

- Q: A scenic view of the Wallflower office? A: How do you feel about watching a reggae poster that says "It Be Jammin'".

- The fact that a girl may or may not have a university degree does not affect the choice a man makes in regard to whether he wants this girl or not.

- Stephi: "That's it. We're doing a cleanse. The lemon one that Beyonce did!"

- A to Z also has a trademark like HIMYM did: the silver dress versus the yellow umbrella.

- Theory: I have a feeling the deadling is just when they take their relationship to the next level. 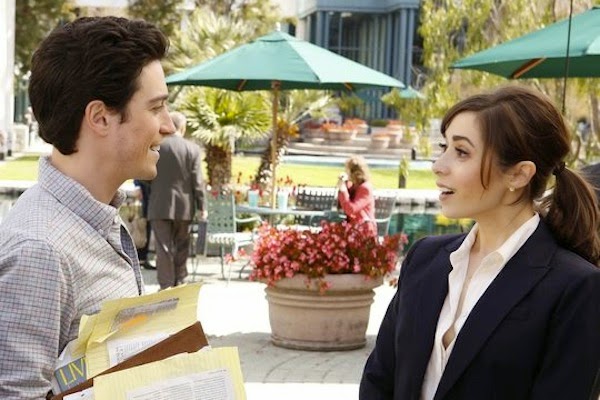