The Big Bang Theory just got renewed for three more seasons recently. Normally, a viewer would assume that the next trio of the show would stick to familiar ground and that the writers wouldn't challenge themselves in any way. However, we were proven wrong when this season had its due course. Every character had his/her own screen time which in turn gave them a richer character development. If we start with Sheldon, we can easily say that his main development came in the career and familial relations categories. His career swindled from pillar to post this season, especially with his discovery and his attempts at quiting. The episode in which he tackled his own mother for "cheating" on him was a true bonding moment, which may lead to a closer relationship between the two. All this change in Sheldon's life is a good thing for us viewers; however, Sheldon himself can't cope with his life around him changing its coordinates.

The final two episodes of season seven represent more than just another ending of yet another chapter of this show. They represent the realization of one of the most popular viewer requests: character development. Gorilla celebrated Raj's new relationship, Penny's new determination towards her career, and Howard and Bernadette's relationship. The A-plot involving Leonard and Penny getting engaged was indeed a very entertaining one, especially when it came to the only scene we've seen (Hey! A pun!) from the movie. Not only was it hilarious, but it also showed Penny's perserverance, that she wanted to concentrate on her acting more than anything in the world.

The last few episodes have lacked the atmosphere of The Cheesecake Factory (which had became a sort of mural for the show), but it was worth it, as any character development, whether forward or reverse, is taken as the writers turning over a new leaf. Right now, there is a plether of opportunities for Penny (Yes, that was a Full House reference!), and as a member of the audience I am willing to see her take chances. Tonight was nothing less than an episode to remember: the episode where Penny sacrificed her job for Leonard, and then told him that she wants him over fame, money and success. That moment was sweet, but I will have to admit that its buildup was far more interesting: Penny and Leonard arguing over what metaphorical pastry represents Leonard. And the anticlimatic engagement followed by the romantic proposal was another plus point in my opinion.

The B-plot was another reason why the episode will be remembered. It finally showed Raj's love life becoming a stable ocean instead of the tempestial state it generally is in. The depth added to Raj's character accompanied by Sheldon's socially awkward humor created a storyline that as a critic I would say was perfect. The co B-plot was a filler, but it did add comedy into the episode. We didn't get a glimpse at Mrs. Wolowitz, but we did get a whole lot of insights into what Howard and Bernadette's life is going to be like once they decide to bear a child.

Meanwhile, the season finale continued the writers' new-found obsession with character development, but they trademarked it: they showed how all these changes are negatively impacting Sheldon. The entire finale could be described as the aftermath of season seven, which culminated in the burning of the comic book store (Another place we haven't seen in a while: it seems like the writers are creating a whole new look for the show). The entire episode revolved around how we are afraid of change, and how immature we seem to others when we cling on to the past. The episode was literally Chuck Lorre screaming, "MOVE ON!" at the top of his lungs to all you hung up people. And telling us that there's a limit to everything, including bragging. Raj's constant hinting at his recent accomplishment in coital departments started to annoy us, but that was the effect of the episode. That was one thing that got on Sheldon's nerves. But the major disappointment came when he was denied a shift in profession, as we recall from previous episodes. (Now the writers are infusing some continuity in the mix, LOVE IT!) Along with the new living arrangements, these two completely blew Sheldon off his mark. Jim Parsons' acting here is phenomenal, and I think that he might as well bag another emmy this year (Update: He won the emmy! :D). The final scene in which we Sheldon is one where he makes it easy and difficult to say goodbye. His childlike qualities make his "parents" distrust him, but the "mother" does realize that it's time to let him go, and it's for the best. Penny's maturity will pay off in the future, and I feel like it's time we get the engaged version of her, for real.

However, the scene which I think will be the highlight of the episode would be Amy's closing to the season. As she screamed at Leonard for letting Sheldon go, her pillow hurling added the much-needed comedy during a time of stress for the gang. Well done, Mayim!

- Howard: "Crushing my will to live is not exercise!"

- Leonard: "It only gets funnier when you explain it, Sheldon." Sheldon: "I know!"

- Leonard: "This would be more romantic if you didn't have gorilla hair on your finger."

- The ceiling drops. Stuart: "It could've killed me! I can't catch a break!"

- Penny: “You taught him well, Padawan.” Sheldon: “Good lord. Padawan’s the student, not the teacher.” 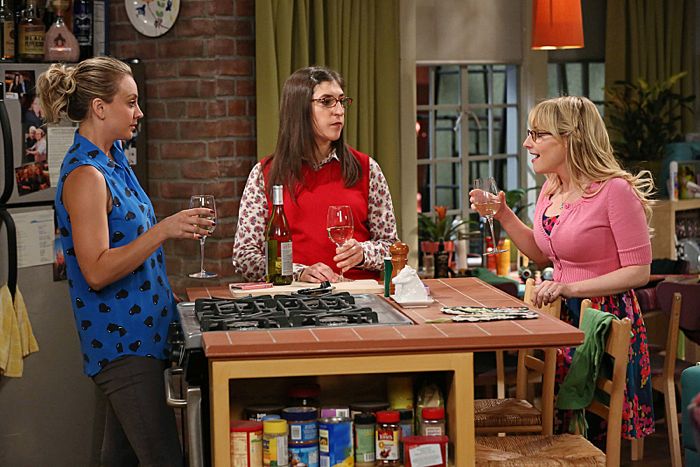