There were a lot of debates on whether renewing The Big Bang Theory was the right choice for CBS. The big fact is that it is television's number 1 comedy. However, how can anyone guarantee that the audience will remain faithful to Chuck Lorre's little baby? A: By simply watching this season. The writers have really taken a leap with this season's character development. At times, at the cost of actual comedy, but I think the compromise is definitely worth it.

"The Anything Can Happen Recurrence" and "The Proton Transmogrification" do an excellent job in the comedy department. However, they don't do much in the continuity zone. I hardly think many would include these episodes in their seasonal recap. But, I would commend them for showing the fleeting nature in the newer scripts of the show. The first episode does a good roundup of the"interesting" events in everyone's professional and personal lives, while the second one uses the show's geekiness in a fresh manner. Although they're not the show at its best, the episodes render this review as a pat on the back to the writers... Recurrence involves the gang turning their backs on Sheldon and Penny's problems with their careers. This plot isn't something that TV exclusively holds, because people do tend make mountains of molehills. The writers do a good job with the plot by turning the night into a fan-favorite Penny-Sheldon bonding episode. The dinner and the psychic are perfect examples of the comedy that the fans expect out of any random episode. So, that's why the episode is a hit. Amy's insecurity was a new level which we never expected, and once again it unveils a whole new array of possible plots for the next season, as does the psychic's advice that Sheldon should invest his time in Amy now. The A-plot receives a thumbs up. But, the B-plot was rather half-baked: I didn't really enjoy the two friends watching a horror movie. You can't really call that a story, can you? Moreover, the Mrs. Wolowitz jokes got old in the fifth season, so try and keep them in control.

Transmogrification, on the other hand, involves two completely contrasting emotions: sorrow and joy. The boys are happy because it's Star Wars day (May the 4th be with you!), but Sheldon keeps on imagining himself with the late Professor Proton. He associates the festival with Arthur's death, and we get to see how Sheldon copes with his pain. The "montage" sequence that the writers create is eye-candy for the geeky viewers who enjoy Star Wars Day. For normal people, there's the funeral scenes involving Leonard and Penny during which they discuss many important parts of their lives. Once again, well done. Finally, for the comedy in the episode, there's Amy and Bernadette's mini-plot involving their cake-baking day to avoid the Star Wars marathon. The employment of naturalism is very subtle, and I like it that way. The drop-by-drop method of comedy and naturalism works well here, but the heavy allusions to Star Wars isn't everyone's cup of tea...

- Sheldon: "That's how Anything Can Happen Thursday turns into It Won't Stop Coming Out Friday."

- Howard: "She could have a freezer full of ex-boyfriends' body parts, and you would still go out with her."

- Amy dressed as a catholic school girl: the studio audience nailed the reaction this time. Moreover, Sheldon's reaction: "Unless you have Gravity on blu-ray under that skirt, I don't know where you're going with this."

- Sheldon: "If we were in a physical relationship, you just lost sex tonight."

- Arthur: "Most of my robes open from the back." 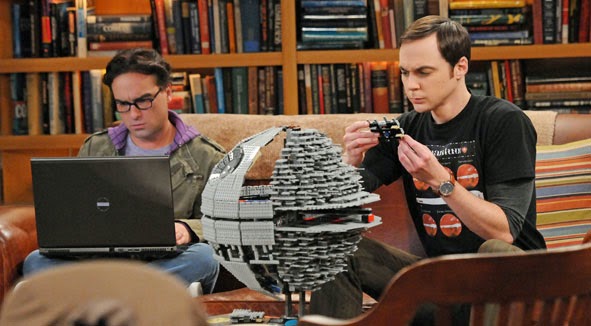