Last week, the writers attempted to embed drama into a traditional sitcom. Their efforts get a commendment, but in my opinion, TBBT can't pull off a drama for more than one or two scenes in an episode, even if the subject matter of the plot is emotional. And that's the error the writers corrected this week: they included drama-type plots and made it comic in their own way. That's how the show should approach pathos; they should embrace the traditional sitcom nature, not abandon it. The A-plot this week was a great joy to watch, especially with the comedy and drama overlapping in many scenes. However, the B-plot had a rather diminished quality of writing which seemed to include various drama-esque dialogues.

Jim Parsons' acting has very much improved ever since Sheldon has been involved with Amy. The manner in which he delivers dialogues is darn entertaining, and one can never miss these. This week, he had many punch lines running throughout the half-hour which ran parallel to Howard's sarcastic comments. The continuity the writers have employed this week by keeping Howard and Sheldon on their trip is great because their friendship will most likely be better than before. The scenes where Howard tries to console Sheldon are a treat because not only do the writers include character development, but they also insert their own form of comedy into the dialogues. The same goes for Sheldon's talks with his mother, including The Talk which makes the situation's awkwardness amplified, not that Sheldon really cares for it. The A-plot deserves a pat on the back for the writers. The B-plot? Not so much...

The "murder mystery" theme was something the viewers wanted to see after the writers disclosed that the entire group of friends had declined the request earlier this season. This time, Raj had to force them into participating. The reactions of the actors' were stellar, especially when Raj teleports them into the future. The indifference on Leonard's face, along with the condescending expression, is almost perfect. A lot of fans have complained about the change Penny has brought in Leonard, but I would like to consider it as a +ve side effect from their serious involvement. The negative aspect could easily be described as last week's penultimate scene where Leonard gifts Penny a car. Those moments make their relationship more one-sided than it actually is, but the writers have shown Penny's different shades of love for Leonard, especially in the premiere this season. Stuart's involvement is something I would like the writers to move on from; I want his life to be better like the rest of his friends' are. It's not much to ask considering they got Howard to move out of his mother's house.

The writers definitely did improve their scripts from last week's nadir in the season. I hope that the future holds brighter images for the show because episodes like this aren't The Big Bang Theory at its best...

- Howard: "I was gonna say we pick up a cake or a pie, but an insult to her faith is always thoughtful."

- Raj: "Cows may be sacred there, but it doesn't help if you look like one."

- Sheldon: "I used to live in those genitals! If someone else is moving into my old room, I should at least get a vote!"

- Penny: "Now I feel bad for murdering you..." Bernadette: "Penny did it! I win! Suck it jackasses!"

- Sheldon: "I love my mother, even if she fornicates like a demonic weasel." 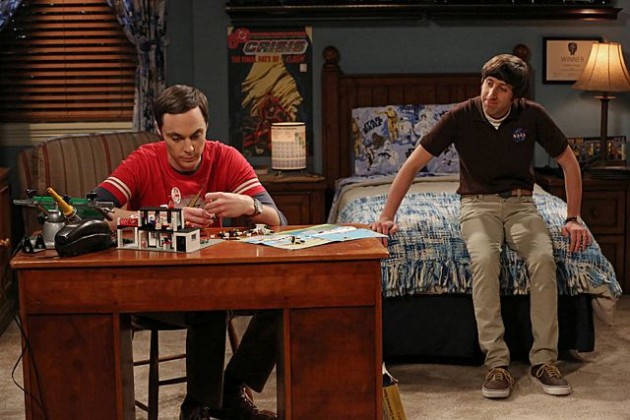