I can assure you that I am not the expert when it comes to change. It terrifies me to go charging out into the cold unknown; I would rather sit in the warm, cozy spot I have liked for years. But life isn't like that. Life moves on whether we like it or not. We can either embrace it and be happy, or neglect it and whine that our lives are no longer happy. That's the dynamic this show has. Three years ago, the writers decided to change the aspect of four bachelors with one female to a completely new dynamic: the three relationships. Ever since then, the viewership of the show has reached its peak and stayed at #1 in the country, heck I would say the world. The comparison the characters make of themselves at the starting of the show to now is remarkable, even though not many transitions were made. And this comparison resonates to the entire episode.

Sheldon isn't happy about change himself. His square routine needs to be as exact as the masses on the periodic table or else his world will be chaotic. The various uses of Sheldon's pedantry are always a hit for me, and my theory is that the awards Jim Parsons gets is because of his excellent portrayal of Sheldon Cooper over the years. Furthermore, the character's complexity as a contrast to the show's simplicity is something to marvel at. Chuck Lorre has unknowingly created such a crisp paradox that the viewers can enjoy indefinitely. This small paradox is one of the factors that contribute to the show's immense commercial (and critical, at times) success.

This week, Sheldon's non-change theory turns into a whirlpool in which the entire gang gets stuck. Firstly, it creates friction between Leonard and Sheldon that has often had grave repercussions. This idea isn't generally "original" (Like HIMYM's episode this week), but the writers know how to adapt a script into their own. The feelings the characters go through as the table decision is made is what makes this change-themed episode different from others. The comedy generated is very fluent, and the viewers can relate to Sheldon (for once). His pedantic attitude towards anything is given a new light this week: narcissism. He analyses that his equilibrium has been disturbed by Amy, and he immediately goes to end the relationship with her. The change in Sheldon's attitude has been one of my favorite changes by Steve Molaro. He used the "three relationships" dynamic so well that the show has been nominated twice for the Emmy for Outstanding Comedy Series.

And this episode displays the dynamic in a new way. The three couples try to go through a minor/major problem while sorting out issues with their friends. The table is nothing but the new "cool" Leonard Penny has created. Sheldon has a problem with that because an open-mind roommate is nothing but filth in his perfectly coordinated world. However, when Penny points out how much Sheldon has been moulded by Amy, we all take a step back and compare the Sheldon from seasons one, two and three to the modern Sheldon. He's holding hands, kissing and is more affectionate. "And that stops right now." It feels natural that one might act impulsively when they realize they have been mistaken and have let something flow beyond its limits. And that's what the writers portrayed this week. Another element of naturalism was when Amy pretended to be indifferent towards the break-up situation. I really liked the way the writers had the girlfriends do the talking, and made the men follow suit.

Although the first  two couples had a very entertaining plot, Howard and Bernadette had a rather dull one. The NASA conundrum that Howard has this week is a reprise of the last two seasons, and it was not funny to see Howard's BP rising to its peaks because of his mother. I would like for their relationship to go North for once. Moreover, the intervention is more of a HIMYM thing which other shows can't really pull off unless they add their own sort of twang to it. On the other hand, the couple's scenes with the rest of the gang are entertaining as the gang having dinner together is something I will never want to change. Those scenes are the show at its most raw and pure form, and most critics find it utterly entertaining. For me, I absolutely relish these moments. These moments render a homely feeling to the show, and make some quirks into life-like traits. My favorite moment was when Sheldon concluded the episode with his hilarious "Sometimes, the baby wins..." line...

- Raj: "I sit on the floor for years? No one cares. The pretty white girl's there for ten seconds and we're all running to IKEA."

- Leonard: "Sheldon, you never had a personality. You just had a few shows you liked."

- Penny re-shaped Leonard with her "fangled ideas and fancy genitals."

- The dynamic: Raj is the fun one and Bernadette is the buzzkill.

- Amy when Sheldon rejected moving in with her: "Damn it! I got cocky!" 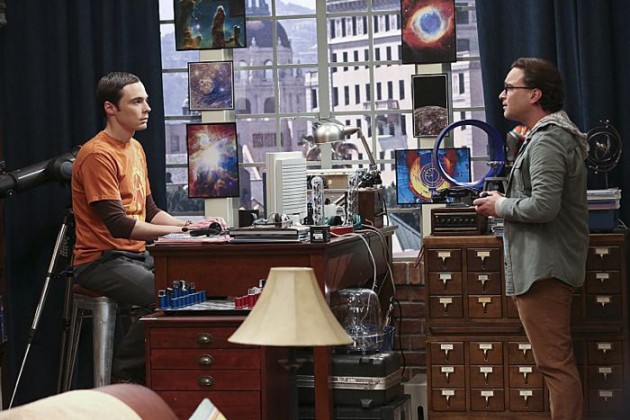