I've adapted to the mid-season hiatuses of every show. The months of March and April rarely have anything new on TV, as each show juggles with its timings to get the best ratings. One of the best antagonistic shows would be HIMYM and TBBT, both of which run on CBS. TBBT just recently terminated the two-week run, and will continue once HIMYM is done with theirs. However, this juggling does bring out the best episodes of the season, and moves the plot further in different ways, in contrast to the boisterous month of October in which all shows start a new season.

Let me start by saying that this week's episode wasn't top-notch high class, but was funny and sweet. There are many obvious episodes in HIMYM where the characters get all ostentatious and start selling out an excess of emotional drags in a half-hour. In contrast, this week took its B-plot from last month's The Ashtray.

The first quirk introduced would be the british drama, "The Woodworthy Manor." Ted always has his cup of tea with biscuits on his bed while watching it. Meanwhile, Marshall impatiently awaits Lily to be liberated from her job. He loses his calm when Lily returns with hipster glasses on and whines about caviar and champagne. At the Fortress Of Barnitude's sale, Ted and Marshall act as a British couple, and actually succeed, unlike Taylor Swift who ended up mocking Harry Styles at the Grammy's this year. The entire theme was rights for homosexuals, which I assume most of them actually do support. Lily is constantly being made the bad guy because of her overwoking habits nowadays.

Meanwhile, while the trio was side-stepped to work and relationships, Barney and Robin were on center stage with a plot on Barney's abode. One might as well not like the genius behind each gadget, but I have got to admit that they are miraculous. At the beginning, Robin gets angry for the conceptions and feels insecure on the number of women in the appartment. Then, when she organizes the auction, she starts to show off each idea as an artwork and bring in the money.

She finally realizes her mistake when the buyers decide to smash it and squander all the time Barney spend inventing the doohickeys. First, the Ho-B-Gone, then the human chute, and even the face projection: another quirk. As HIMYM alludes to these classics, it reminisces about it's earlier days. A few examples of episode which alluded to many significant achievements would be "How I Met Everyone Else", "Three Days Of Snow" and "Rabbit Or Duck".

My favorite moments were when Ted got all homo and douchey simulatneously. He is the only one with regrets in the group so far. Moreover, the exposition was solid with good humor and a small flashforward for us viewers. 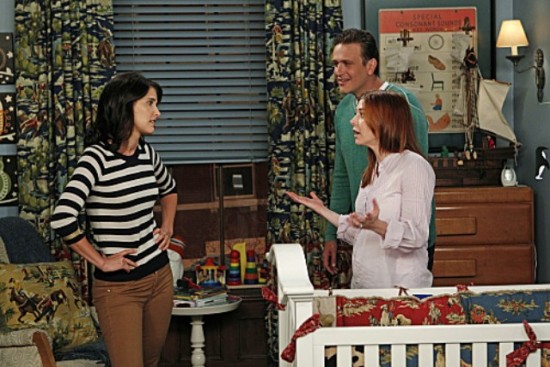